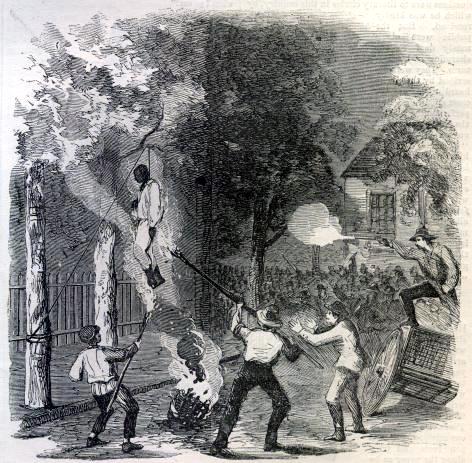 The 1840s were decade that consisted of extreme changes for the Irish. The potato famine was a major reason for their departure from Ireland. They were so desperate to leave their home county, that they endured terrible conditions on the coffin ships just to get to America in hopes of a better life. The adjustment to life in America wasn’t the easiest either however, with the impoverished Irish having to cram into tiny, run down, New York City Neighborhoods such as Five Points. Five Points quickly became a hub for prostitution and corruption, with it’s main inhabitants being the Irish and the Black communities.

The Draft that occured in 1863, was a catalyst for many eruptions between various groups of people in New York City. The Draft sparked the riots, which mainly consisted of Irish and German immigrants resisting being forced to partake in a war for a country that they were so new to. They felt that they  left the destructive nature of their motherlands for a better life; not to have their lives threatened once again. However, as the days passed the riots quickly turned into acts of white supremacy and racism.“The riots were an occasion for gangs of white workingmen in certain trades to introduce into the community the ‘white-only’ rule of their work settings” (Bernstein 27). Many Irish felt that their employment opportunities were threatened by blacks who were in competition with them for work. The poor, urban setting that they were inhabiting didn’t provide many good job opportunities very often, and Irish felt that whatever jobs were being offered, they should automatically be entitled to due to the color of their skin; however this was not the case and competition became fierce amongst them and the freed black community. The Irish thus began releasing their anger about this through violence during the week the draft riots began. They targeted blacks and abolitionists, killing many of them and destroying things such as churches, homes, and orphanages. As seen in the image below, many Irish would go as far as partaking in the public lynching’s of blacks, brutally killing them as a means of displaying the animosity they felt towards the lack of work there was within their struggling urban environment. Over the course of the next few days of this week of violence, the Irish’s anger towards the free black community, their impoverished living conditions, and lack of jobs was magnified. It shone an unwanted light on Irish Immigrants, and heightened the “savage like” stereotypes they had carried with them back in Ireland.

Although the draft riots were a major occurrence in history and largely affected many groups of people, it seems as though that it’s memory is trying to be pushed under the rug and forgotten about. There are no memorials or museums dedicated to the draft riots, which almost seems like an attempt to prevent the Irish to be viewed in such a negative light. Although the riots obviously don’t represent the feelings of all Irish immigrants about the draft or the freed black community, they still represent the majority of opinions of the inhabitants of Five Points, which at that time was the posterchild of Irish neighborhoods. As understandable as it is for Irish who did not partake in these events not wanting be associated with the actions of the members of Five Points, it is still a piece of history that should be remembered in an attempt to preserve our past, and not let anything like it occur again in the future.