Around 400 AD, Saint Patrick converted the people of Ireland to Catholicism, as England at the time was Catholic. In 1170 the King of Leinster, Dermot MacMurrough, was overthrown and appealed to the current king of England, Henry the II, for help. This gave Henry II a chance to invade Ireland, and a reason:  Pope Hadrian IV wanted Henry II to conquer Ireland and further spread English Christianity. In 1532, Henry VIII separated from the Catholic Church of Rome to divorce his wife, Catherine of Aragon, and England became a Protestant nation. In 1541, he was declared King of Ireland. He created laws to increase English control over Ireland, and attempted to convert the Irish to Protestantism–to no avail. The Penal Laws were put into place beginning in 1675, which prevented many Catholics from an education, property, and intermarriage. From 1845 to 1852, 2 million of Ireland’s 8 million died or emigrated due to repeated failure of the potato crop, known as the Great Famine. Those most affected were the Irish peasants. And in the late 1800s to early 1900s, many Catholics were living in squalor in Dublin tenements, with barely enough money to pay rent, let alone buy food. Photo of a destroyed tenement in Dublin.

Since the English first involved themselves in Irish affairs, the Irish have been second-class, if that. With so much degradation, it’s a wonder the Irish didn’t do anything before the 1916 Easter Rising, and even then, few actions were taken. So why did the Troubles happen in the ’60’s? Why didn’t it happen before? 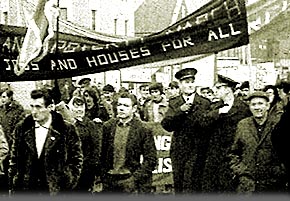 Since the beginning, the Irish Catholics have been separated from their Protestant counterparts. They were aware of the different lives each other led, but unaware of the differences themselves because they were so separated physically and socially. There was segregation in religion, education, and even the bars they drank at, so their first real interaction was during the housing crisis. Catholics and Protestants were vying for the same homes, and when single Protestants began taking homes that could have been for large Catholic families, there was uproar, and that’s when the first civil rights marches began. Catholics were able to truly see for the first time the advantages and partiality given to Protestants, even though they had been thus for centuries. The inability to secure a basic human need was the final straw.